Wish on a Winter Wonder Landscape 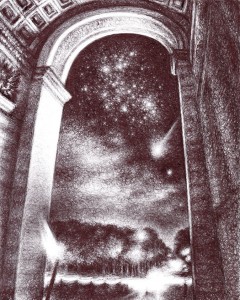 I was invited to participate in a the holiday group show “Winter Wonder Landscapes” at Gallery 77, where I previously had my solo show this past fall. I dropped off “Wish” a few days early with the curator so it could be included in another holiday event. I was nervous about leaving it at an event I wouldn’t be attending, so I asked some of the participating artists to also watch over it for me.

The next day, we were installing the show at Gallery 77, when my friend the curator told me not to be alarmed, but “Wish” was gone! It appeared to have simply vanished into air in a locked room.

Now, “Wish” is a very special drawing for me, I created it after seeing a shooting star over Chelsea, Manhattan. When does that happen?! I made a wish for true love on that star, and not even two days later that wish came true. This drawing was important for both me and my partner, so when it does sell, I want to know that it’s found a good home to bring good fortune. Having it disappear like magic wasn’t what I had in mind!

I’m so grateful to be working with such an amazing curator! She’s never had art go missing on her watch, and was determined to keep it that way. We began our search, and after only one sleepless night, she notified me it had been found! One of the artists I entrusted it to at the last event had decided to bring it to Gallery 77 personally, so that they could ensure its safe delivery. I have never been so grateful to see my own work! “Wish” came back to me for now, still waiting to be found by its next owner.

My relief made the opening even better:

My wishes keep coming true at this show: My drawing “Winter Light” SOLD! 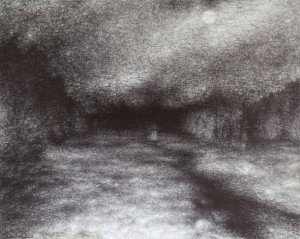